123\SmartBMS gen3 is an easy to use yet advanced, modular BMS to keep your lithium batteries in perfect condition, increasing the lifespan of the battery pack.

The BMS measures important data like cell voltages, cell temperatures and in- and outgoing currents with the two included high accuracy, dual range current sensors. By measuring both currents independently, it is possible to know the current production and consumption. The system balances all cells to the same voltage during charging.

Two integrated signal relays with potential free contacts can be used to switch enable/disable signals or power relays to control the power to chargers/solar regulators and/or inverters.

Easily connect your phone to the BMS to see relevant information including state of charge, energy consumed, energy stored, in- and outgoing current, cell voltages, cell temperatures, SoC history of the last week and error history. 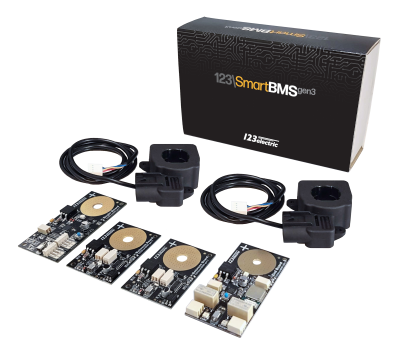 On which type of batteries can I use this BMS?

The BMS cell boards work in a voltage range from 1.5V to 5V. Every cell that operates between this voltage should be compatible. A couple of working cell chemistry examples are LTO, LiFePO4, NMC and NCA.

Can I use only one current sensor instead of two?

Yes, it is possible to only use 1 current sensor, the BMS will also work perfectly fine. Using one sensor will use less power on the Begin Board. The drawback is that you cannot measure incoming and outgoing currents independently, but only see the current going in or out the battery pack. Connect the current sensor to Sensor 1 on the Begin Board and make sure to see a positive current in the App next to the battery icon when charging and a negative current when discharging.

Can I place multiple cells or packs parallel?

My BMS has no communication

No battery data on the app and the “E” sign will light ON in the battery details tab of the App. Check the flashing LEDs on the string of cells.

I forgot my BMS PIN number

While the Begin Board is connected to the battery cell, press and hold the blue button for 5 seconds. The PIN will be set to the default “1234”.

Wireless connection does not work

Make sure your phone supports Bluetooth 4 or higher.

The following steps can help to connect to the BMS.

Why does the Android app need location permission?

When you turn the location permission on, the app will get a list of BLE devices that are close enough, like 123\SmartBMS.

The app does not use or store the location in any way.

Which relay do you recommend?

This depends on the application. We always recommend a power efficient relay which consumes few energy when turned on.

The + hole is too small for my bolt. Can I drill the holes bigger?

Yes, the boards are designed so the + pole can be drilled bigger if needed.

Indicated currents are not zero while no current is being drawn

Make sure there is running absolutely no current through the current sensors during the zero calibration procedure.
On the Begin Board you will find a blue button. Press and hold the blue button until the LED flashes fast. Now release the button. The calibration is done.

Very small currents cannot be measured by the current sensor, so the BMS will not update the SoC. Only when one of the cells is below Vmin, the SoC will be recalibrated to 0% because this is a known point to be empty.

Make sure the pack is charged regularly so the SoC is recalibrated to 100% when full.

If you are not going to use the pack for a longer time (for example because it is winter), you can disconnect all loads so the pack will not be drawn until empty. You can also connect a small trickle charger to prevent the batteries from being discharged during standby.

How to control a Victron device with GX in the installation

For all information regarding Victron GX integration, see Victron Integration.

How to control a Victron without any GX

For example if you have an inverter with a remote port, you can wire the two remote wires to the Discharge/Load signal relay potential free contacts located on the End Board (last cell board). Use connector pin 1 and 2, which are “allow to charge” and “common contact”.

Victron BlueSolar and SmartSolar MPPT Charge controller
Use the Victron VE.Direct non inverting remote on-off cable, part number ASS030550310. With this cable, you can connect the battery + to pin 2 (common contact) of the Charge signal relay of the SmartBMS.  Connect the Victron yellow remote cable to the SmartBMS Charge contact pin 1 (allow to charge). Also see the Victron document.

Victron without GX or “remote” control
If your Victron device does not have a remote control signal and cannot use the VE.Direct non inverting remote on-off cable, you can still connect a power efficient power relay to the BMS so the BMS can switch off the device in case this is needed. See the manual for a general schematic.

How to control a combined charger/inverter 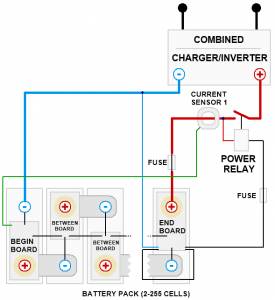 How to wire the 123PowerSwitch

The 123\PowerSwitch can be used to switch off one or more loads/chargers and can be controlled by the 123\SmartBMS.

There are two configurations possible:

This configuration is mostly used with combined chargers/inverters which is a setup where the charger and inverter are in the same device like the Victron Quattro/Multiplus. 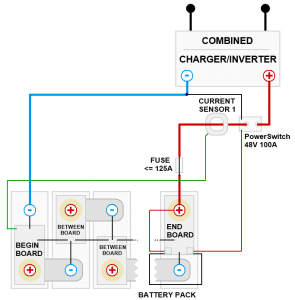 Use two 123\PowerSwitches: one for all chargers and one for all loads/inverters
The benefit of this configuration is that when one PowerSwitch is off, for example the “allowed to discharge”, the other PowerSwitch (“allowed to charge”) stays on. Thus if a battery cell is empty, the charger will stay connected to charge the pack. 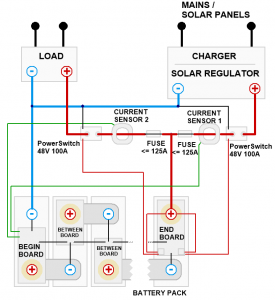 How to wire the Victron BatteryProtect

The Victron BatteryProtect can be used to switch off one or more loads/inverters and can be controlled by the 123\SmartBMS. 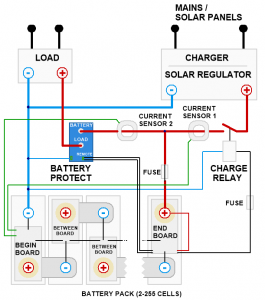